Travelling is one of the many hobbies of almost everyone. Not only that it soothes stress, it also allows you to learn and see new different things. Speaking of traveling, of course, it’s not just about roadtrips, trekking, etc., it’s also about riding airplanes, taking flights. And although millions of people fly every single day, they kind of accidentally do these airport/flight mistakes. Flying can be stressful; more if you’re not prepared. If worst comes to worst, you might be looking at a new booking/flight again.

As per American Airlines executive, more than 70,000 flights were missed because of airport screening delays in 2016. Imagine those number of flights. Furthermore, what you need to think of doesn’t end there. Why? Let me ask you this: where will you land?

In this article, we were successful in gathering up a few flight attendants and travel experts. We got them to ask and to dissect some of the more common mistakes people do when they are in the airport; before and after riding the plane. With this article, we will help you in making more intelligent approaches on your next trip.

Just pack what you need

We can’t deny the fact that our luggage are sometimes the pain in the neck. A lot of travelers overreact in preparing which tends to lead them to stress out more. An expert flight attendant Steffanie Rivers, explains that people tend to carry more than what they need. “Only bring what you need,” says Rivers.

“Bring luggage that you can handle, carry, control, lift into the overhead bin yourself. If you can’t do that, either reconsider bringing it or check your luggage. Don’t expect flight attendants to lift, carry, pull, your luggage,” she added.

More importantly, relevant stuff like medicine, documents, gadgets should always be in your carry-on bag. What if for an instance, you get in a situation where you need those things; what if the bag doesn’t arrive on time? What if it’ll take more than 2 hours to get it?

In conclusion, bring things that would be the ONLY THINGS YOU WILL NEED in your trip.

Allot MORE time for your flight

Although this is a basic scenario, many people make or break in situations where time is in dire need. Allotting time is crucial in flying; and when I say allotting, I mean it. All experts and flight attendants conspired and said that wrong preparations are usually grease to the mistake. Steffanie Rivers explains that people underestimate the time they spend at the airport. “I like to think of flying as sort of like planning a wedding; if you want a great June wedding, there are ‘must do’s’ that happen a month before, two months before, and so on,” she explains.

Having that said, securing your flight is a deadly task. When you can frequently check on your flight as soon as your airline allows you to do so, do not hesitate. Doing this will not only make you more used to the time and/or give you flexibility in departure, it also opens doors to things you can actually do without having the fear of messing your flight up.

Prepare yourself for a delayed or cancelled flight 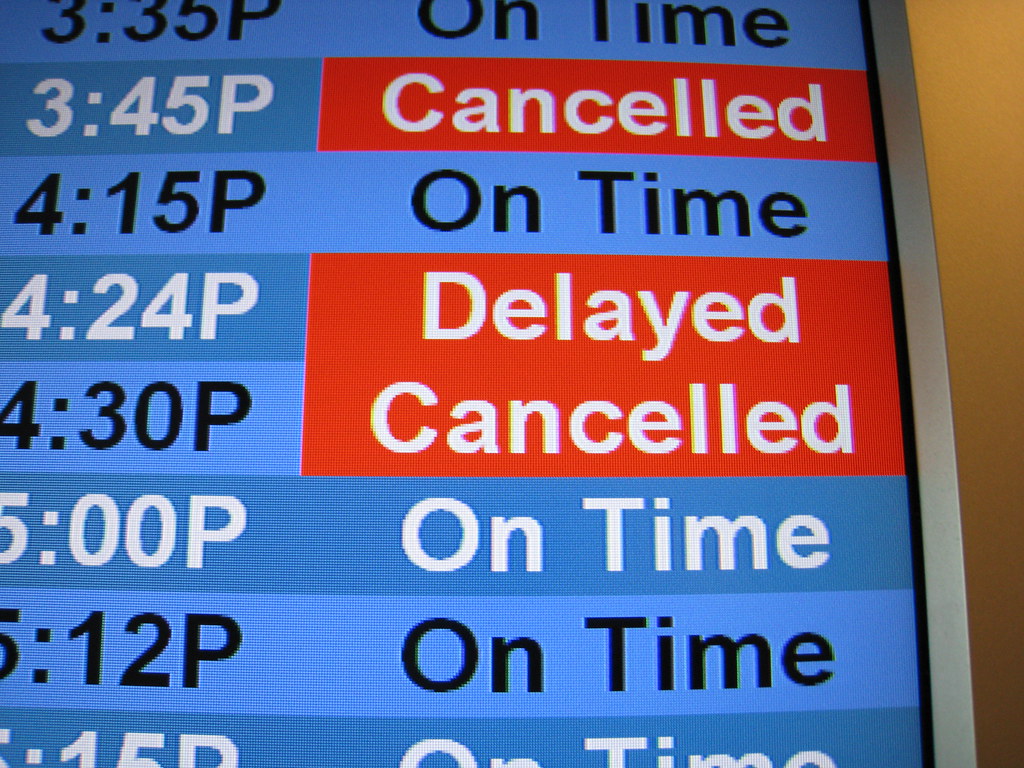 Mishaps happen; the system of the airlines/airports are technology and technology has its flaws. According to the Bureau of Transportation Statistics (BTS), in 2017, almost 20% of flights were delayed; 1.45 % got cancelled.

So what do you have to do in this scenario? Well, most people and travelers would seek help from the desk at the airport. Imagine a flight cancelled, how many people would be in that plane? Everyone will try and get help from that desk; would you ramble and join them? Brian Karimzad, a travel analyst at MileCards.com says that seeking help from the airline’s support counter is a mistake.

“Don’t wait in line when you need help;.when your flight is cancelled or delayed, phone agents can do as much as the agents at the airport. So plug in your phone and get help faster. You can also login to the website or app of your airline and rebook in many cases,” he says.

Don’t try and be mad about it because agents control the situation now. Most often, they would be happy to accommodate your request if you ask politely. Moreover, keeping a handy hotel nearby would also be of much appreciation. This goes back to our allotment tip.

Research about the trip you will have

If you’re riding internationally, learn a thing or two about how your flight’s gonna be. Going in there blind won’t help as much as you take time to read a few stuff. Veteran travelers, like  Karimzad, who has flown over 2 million miles, knows this. Research about the airport and airlines you will be flying to. For example, there are airports who are better off with a paper ticket than a digital one. Knowing this would be of great relevance since you would know what goes well and not.

Although frequent travelers know this, some of them still get the bad piece of the pie when traveling. Of course, we’re just humans; we forget things and it’s all part of being who we are.

“I was flying to London and spent a bit more time in the lounge and went to go to the gate, forgetting I still had to clear immigration in Lisbon. Even though my walk to the gate would be all of 5 minutes, the passport control requirement added time—too much time. Given it was a Saturday, in the summer, I had a very long line,” says Andy Abramson, the 2015 Business Traveler of the Year for Business Traveler Magazine.

In a year, he spends more than 200 days in airplanes. He wasn’t worried about this since he has this chip enabled that he can use to pass immigration quickly. However, the thought of him not entering the European Union in Portugal slipped his mind, making his chip thingy not work.

“Lesson learned: Always be at the gates early. From there, know what you have to do,” explains Abramson.

Don’t forget about the airport lounge

Many people fall to the mistake of not utilizing the airport lounge. Those who don’t fly very so often, are usually unaware that there’s an existing airport lounge. This airport lounge is an amenity that you should use. Hell, you paid for it or, it’s one reason why your flight is hella expensive. Imagine sitting somewhere uncomfortable versus sitting nicely in a place where you can relax, sit back, and enjoy free fast wi-fi? You can also take a shower, take a nap, and even rest for a little while.

So these are just few of the more common airport mistakes people do. I don’t know but from what I can see, they tend to be anxious about their flight, causing their stress to build up without having the thought of enjoying the flight itself.

Enjoy it, embrace the stress; it’s all part of the adventure! Your trips always include those long waiting hours; it’s not just about the trip, it’s also about you waiting for it. Always remember that before you get to the good part, you need to go through something not very good first.