Have you ever attempted playing video game with your eyes closed?  This is really impossible because it was always been a fact that we need eyes for us to play.  However, one “blind” man who begs to disagree because he has been playing video games in countless hours since he was five – making him one true gamer.

Toby Ott is a 27-year old gamer.  He enjoys what he does despite having never seen what is on the screen.  Toby has bilateral anophthalmia, an exceptional condition which means he was born with no eyeballs.

A short video documentary, Gaming Through New Eyes is an award winning Short Documentary which explicates that Toby’s situation hasn’t stopped him from playing all kinds of video games over the decades.  He has played games that over a million people have played and he is better than most of them. 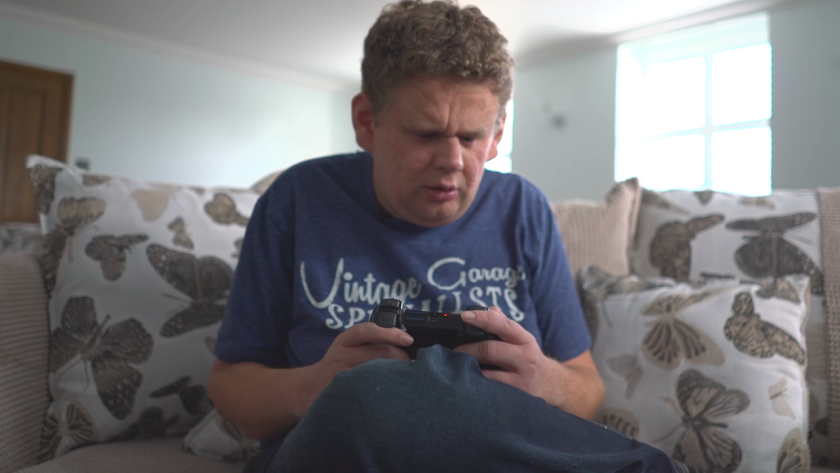 What games does he play?

He first tried out Mortal Kombat in an arcade.  In addition to that, he is obviously enjoying and loving the medium that’s primarily visual despite the circumstances; he actually fell in love with video games.  He loves playing fighting games where he has gone online, and fought and won against human opponents.

Games like Injustice are full of audio prompts which he uses to get a sense for when he engaged in a game. According to Toby, “Video games are challenging to play because obviously they’re very visual but I enjoy the challenge of learning how to play these games.”

Toby is also a big role-playing game (RPG) fan – like Final Fantasy. With the aid of friends and cousins who walk Toby through the structure of the game’s menus and battle system, he’s capable enough to memorize how many button presses are needed to perform an action. Then he’ll go back to the sound cues and music to determine his location in the game.  He successfully plays games like Final Fantasy X and XIII.

Aside from the story, music and characters, playing a game like Final Fantasy while blind presents a set of challenges that for Toby are seen as part of the game.  Bosses on the other hand, could take weeks to battle; Toby spends staggering 8 weeks fighting one of the bosses in Final Fantasy X.

He even enjoys first person shooters like Doom and Duke Nukem.  Though with these games he has to enable a few cheats since it’s almost impossible for him to find objects like health packs and keys because it doesn’t make noise.

“Music is a big part for me in terms of gaming,” says Toby, “I enjoy voice acting as well because voice acting is the way that you sort of feel attached to the character or characters in the story.”

Toby admits that there are also certain games that he is unable to play because they lack visual cues and sounds.  However, he surely believes that there would be more visual cues that might be included in the game menus because this would enable him to learn a game on his own.

Even a person born with this kind of disability is able to pursue his love for games.  This situation is one clear example of wholeheartedly giving in to his dreams and passion.  So if Toby is able to do this with eyes closed – why can’t you?